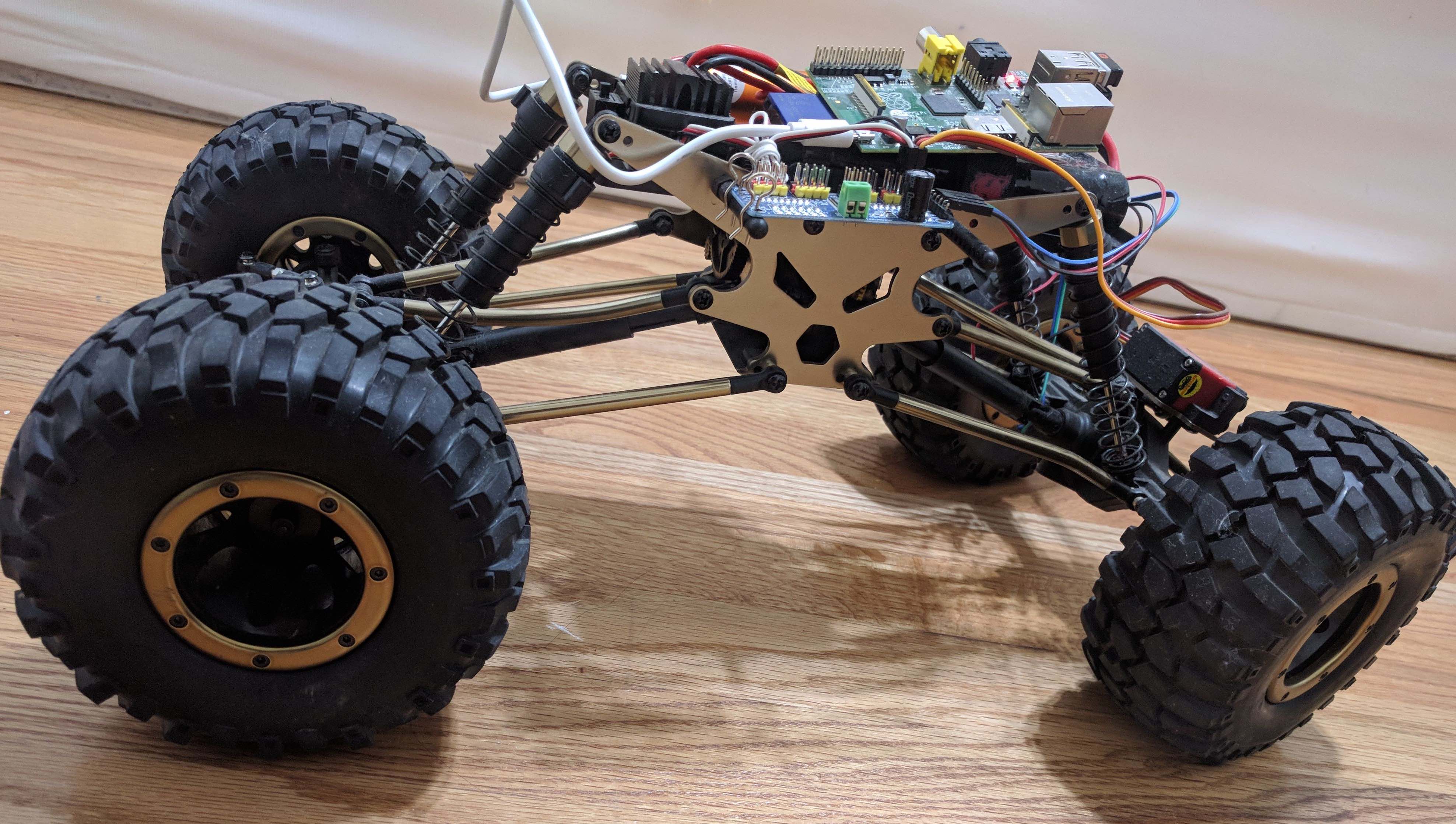 In this post, I will describe the setup to control an RC car with Raspberry Pi (RPi). The control process will be manual (no intelligence yet); basically login into RPi with SSH and use keyboard to control the movements.

In the next posts I am targeting to showcase the use of lidar and auto navigation.

Below is a high level overview of the steps.

I will now go into the details of each of the above steps.

I am using a servo driver (SD) because it is convenient to control multiple servos while maintaining electrical separation between Raspberry Pi (RPi) and motors. It is possible using the latest RPi to control multiple servos from GPIO pins as long as the motors are powered through a different power supply.
If you want to pursue that route, pigpio seems to be a good library with python interface. I have not used it personally. In my Red Cat car, the ESC/BEC connects directly to the battery and powers the RC receiver and the turn servo (via RC receiver). When we replace the RC receiver by SD, ESC continues to power the drive motor and provides V+ to SD which continues to powers the turn motor.
The ESC control is similar to servo control, so now we can control both the motors via SD.

Remove RC receiver and install the servo driver (SD) in place. A RC receiver looks like the picture below. RC receiver should have an antenna sticking out.

The numbering on the ports starts from 0. We will use these port number to later identify turn and drive motors in the python code.

Note: Before removing any connections take pictures of the existing connections from several angles so that we can go back to the out-of-box configurations if needed.

We need to connect four GPIO pins from RPi to the side pins on the SD (check the image below). This particular SD can be controlled over I2C protocol. Below is the list of pin connections. 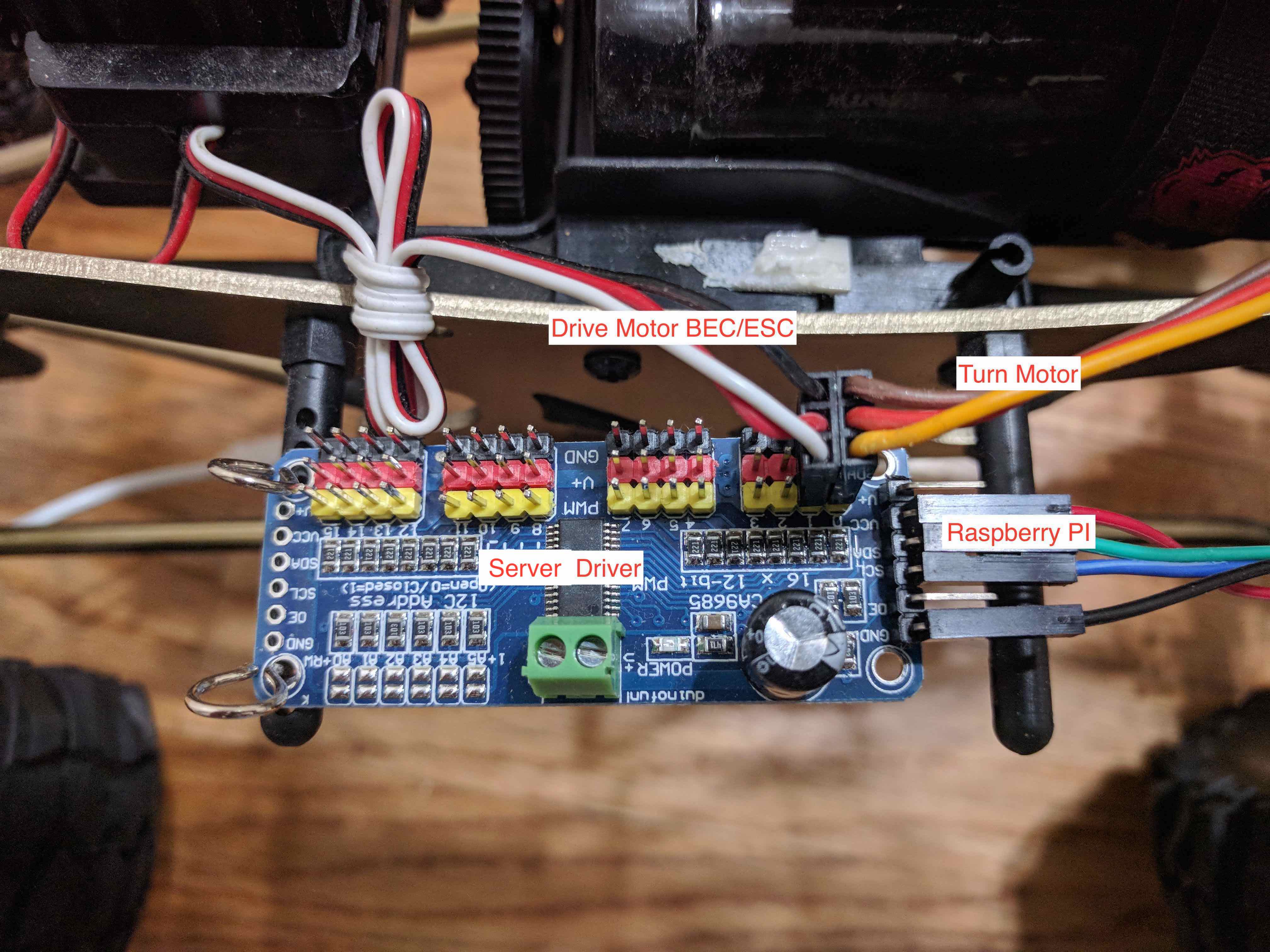 Here is a detailed diagram for pin layout and numbering on different versions of RPi. Above numbering might be different for your version of RPi.

Leave V+ and OE pins unconnected on SD. V+ pin is used to power the load. Since we have already connected ESC’s three pin adapter which has V+, we don’t have to use this pin.

Next, connect the usb power supply to power the RPi.

(If you are new to RPi, I recommend following this guide to get started with RPi)

When running for the first time, we need to enable I2C module on RPi. The detailed instructions are here. Briefly said, run sudo raspi-config from terminal and from the Advanced Options enable I2C; Reboot.

This library provides an easy interface to the SD driver. In the next section, we are going to use two python scripts to test, calibrate, and control the RC car. Download the script from here

(Note: For controlling the RC car remotely, You should be able to connect your RPi to a WiFi network and login over ssh)

First, we will run the simpletest.py to make sure connections are correct. This script is based on the example provided in Adafruit’s library. Main modification is the PWM frequency for ESC which I have set to 50.

This code continuously moves the motor from one extreme to another extreme. The extremes are defined here. I have iteratively calibrated the extremes (pulse length) to match the extremes supported by the motor. You will have to calibrate for your own car.
Run this code for all the motors in your RC to make sure that SD is connected properly and ESC is controllable. SD channel/motor to control can be selected here.

Note: when running the above code make sure the car is secure and wheels do not touch anything.

With the connections tested, we are now in position to control the car from RPi. Again for the first test, please make sure that car is secure and wheel cannot touch anything. We will now run the controltest.py script. Set your channels here. The extreme pulse length values discovered when running the simpletest.py can be now set here

Use arrow keys to move the turn and driver motors. You might have to hold the keys a little bit longer to increase the speed or the angle of the turn faster. Press q to exit.